It was an exciting Junior Team Tennis season in Oklahoma City.  With all of the news and shut-downs related to Covid19, there seemed to be no chance that JTT would even happen. When the opportunity came, all of our kids and coaches were so grateful!

The competition was tough, there were so many great teams, but when the final games were tallied the BCC Tennis Academy 12U Barracudas and the 14U Bobcats were crowned “City Champs!” Even though city-wide competition was allowed, the possibility of having a State Championship tournament seemed off the table.  We got word just a couple of weeks ago that The Case Tennis Center at LaFortune Park will be hosting the Junior Team Tennis State Championship on Sunday, August 16, at 1 pm. Our kids are super excited to have the opportunity to compete against the best JTT teams in the state. Go Barracudas! Come on Bobcats!

I wish you could have all been there. The pressure was on the Barracudas this morning as they carried a narrow two game lead into the final round of play at the 2019 Missouri Valley JTT Championship in Tulsa. Coach Brad Lund had crunched the numbers and determined the team needed to score 30 points against the tough St. Louis Sunset Slammers to win.

The two singles matches got things started. John Paul Dillon and Javier Vazquez came out and played like two Jedi knights on the court. Forehands, backhands, serves, volleys…every shot was masterful! By the time our two captains finished their matches the Barracudas had secured 16 of the 30 points we thought we needed to bring home the championship.

Next up, the doubles team of John Paul Dillon and Macy Hays took court one ready to play. And they were ready to play! Macy and John Paul made quick work of the team from St. Louis and secured eight more points for the Barracudas.

Needing what was thought to be six points, our second doubles team of Taytum Jones and Kellen Hays took court two.  Taytum and Kellen opened strong, took a quick early lead, and then the tide turned, as often it does in tennis. Before they knew it the St. Louis squad had won the first set 4-2 and things were looking grim. The big question lurking in everyone’s mind was: “How will a couple of ten year old boys respond to losing the lead and then the set in the biggest match of their lives?” Most young doubles teams would fold up like a cheap suit, but Taytum and Kellen dug deep. They came out for the second set flying around the court like the Bryan Brothers. They hustled, fought for every point, encouraged each other like crazy, and rallied to win the second set 4-0! You read that right…4-0!

Because each team had won one set each they went to a 10 point Super Tiebreaker. Kellen and Taytum jumped out to a strong 7-1 lead only to see the fightin’ boys from St. Louis rally back to 7-5. Taytum and Kellen were unfazed as they closed out the match 10-7 and the crowd roared so loudly you could hear it all across the state of Oklahoma.

It was the most incredible day closing out the most incredible season in BCC Tennis Academy JTT history as the 12U Barracudas brought home our very first Missouri Valley JTT Championship. The Barracudas are incredible group of kids. John Paul Dillon, Javier Vasquez, Taytum Jones, Macy and Kellen Hays, Kadence Williams, Alma Mendoza, and Gray Dillon have now won two State Championships and our very first Missouri Valley Championship. We are so blessed to have leaders like these kids for our younger players to look up to as they set their sights on winning championships of their own. 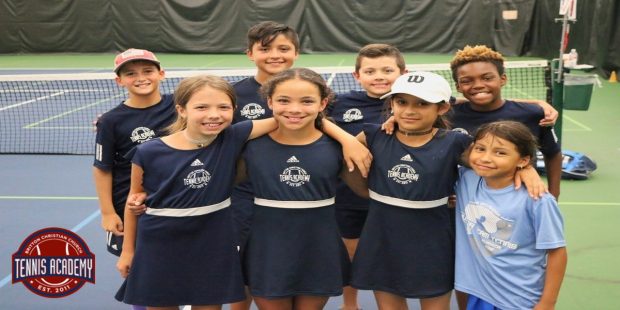 Today, at the Oak Tree Country Club, two teams squared off to see who would remain undefeated. Each match was tight, many games went to deuce, sets went to tie-breakers, but when it was all said and done, and the scores were tabulated, the BCC Tennis Academy 12U Barracudas had won 27-20. Today marks the third consecutive City Championship for the Barracudas!

Coach Brad Lund spoke to the kids before the match and reminded them, “Every game counts so play each point with all of your heart.” That, no doubt, was the determining factor in the match. Coach Brad has instilled within the players the important lesson: “team comes first.” A perfect example happened on the court today. All of our players were finished with their matches except for John Paul Dillon who was playing #1 Singles.  JP split sets with his opponent, each set going to a tie-breaker. JP was playing a 10 point tie-breaker to determine the winner of the match. All of the Barracudas stood on the sideline cheering for JP after each and every point. When JP won the tie-breaker all of the Barracudas rushed the court to congratulate JP! Team first!! It truly is about much more than tennis at the BCC Tennis Academy. We train hard to win points and matches, but we work equally hard to instill within our kids the greatest lessons of life.

With the win the Barracudas will move to the next level of competition and play for the USTA Junior Team Tennis State Championship to be held at the OKC Tennis Center on July 15-16. Congratulations to JP Dillon, Javier Vasquez, Taytum Jones, Kellen Hays, Kadence Williams, Macy Hays, Alma Mendoza, and Gray Dillon.  Good luck as you go on to compete for the State Championship!

It was a historic day for the BCC Tennis Academy. On Sunday afternoon the newest addition to the BCC Tennis Academy, the 12U JTT Barracudas took the court for the very first time at Oak Tree Country Club. The kids have been putting in the work over the past several weeks, with their coaches, in preparing for this new challenge in JTT.

All of the players on the Barracudas, Kadence Williams, Javier Vazquez, John Paul Dillon, Taytum Jones, and Macy and Kellen Hays, began playing JTT with our 10U Cheetahs team. It’s a big step to move up to a full court and playing against older kids (three of our players are 9 years old,) but these kids know how to work hard and their hard work paid off on Sunday.  The Barracudas ended the day with a 32-14 win over Oak Tree.  I hope you will come out and watch the Barracudas compete this Fall as they compete against over 12U squads from across Oklahoma City.